Three years ago here in my great state of Maine, the Legislature voted to legalize Same-Sex Marriage. Shortly thereafter however, the Conservative Right began pouring millions of out-of-state dollars into a media smear campaign that resulted ultimately in the law being put to a people’s vote and narrowly overturned by a 53% to 47% margin.

Now three years later, Gay Marriage supporters have turned in enough signatures to send the matter once again to Maine’s voters. This time however, the main opposition to this movement comes from a new PAC that has been formed just for this purpose. Called the “No Special Rights PAC” (catchy, ain’t it?) it is the brainchild of two of Maine’s most notoriously right-wing and ultra-conservative politicos. 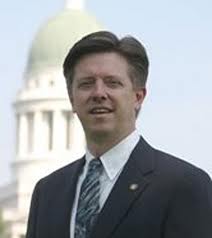 Maine Grassroots Coalition, (whose entire purpose is to oppose any sexual orientation laws that come along) have banded together and formed a new Homophobic Dynamic Duo. All of this to once again thwart the attempts of decent Maine citizens to grant equal rights to all of its people.

When asked why he felt Gays should not be granted equal rights when it comes to marriage, Heath answered:

“There’s no basis in nature for a right to sodomy or a right to call two men or two women who are choosing to relate to one another sexually as a marriage,” he said. “There’s no intrinsic or natural right to that. So we believe that these are special rights.”

What bothers me the most about this entire issue is the question of why they care? Why does the Conservative Christian Right have such a problem with same-sex marriage? What possible effect could a committed homosexual couple getting married have on Heath and Madore or the rest of their ilk?

Even if they don’t personally agree with it, why do they have to force their morality on the rest of us? What are they afraid of?

Because it really does come down to fear. All hate is rooted in fear. Yoda actually was on to something: “Fear leads to anger. Anger leads to hate. Hate leads to… suffering.” So what do they fear? I have to believe they fear that if a gay couple gets married it somehow diminishes the status of a heterosexual marriage. That somehow if two gay people are allowed to get legally married (just like the rest of us) it will somehow cast a shadow on all heterosexual marriages everywhere. That somehow the heterosexuals will be “less married” if gays are given the same basic rights.

I wonder how Heath or Madore would feel if they discovered they had a gay or lesbian child? Would they be able to look their own child in the eye and tell them they are second-class citizens? That they do not have the same basic rights to happiness that heterosexuals enjoy? I think they would both be singing a different song were that to happen.

And what of the law? Why in fact do we have to even legislate this over again? Where in the Constitution does it say that a “marriage” (in the traditional sense) must be between ‘One man and one woman’? That whole concept is just an idea put forth by (you guessed it) the Conservative Christian Right.

Threatened by the concept that a gay or lesbian couple might be treated equally in the eyes of the law and thereby (perish the thought!) be treated equally by society, the Christian Right has propagated the notion that two women or two men getting married is somehow un-natural. How can two human beings in love be un-natural? How can the idea that two people would be so committed to one another that they would like to make the ultimate commitment – legally and publicly – that they are together. Why do I have the right to do that and they do not. I am no better than they are. I am not special. Indeed, some of the most admirable and committed couples I know are gay couples.

Frankly, if you want to talk about a threat to the sanctity of marriage, lets talk about Hollywood for a minute. Kim 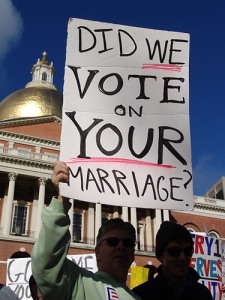 Kardashian can have a Hollywood farce of a make-believe marriage, and thats OK. In fact Hollywood stars in general can swap spouses like baseball cards, and that all falls within the sacred sanctity of traditional marriage. How is that better than two women or two men in a long-term, committed and monogamous relationship getting married?

Frankly, speaking as a married heterosexual, I would far prefer my children model and respect the relationship some of my gay friends share, than the fantasy hetero-weddings they see played out on entertainment television every night.

I am sickened not just by the current debate here in Maine, but by the national debate of the past several years. What am I missing? The Constitution guaranteed equal rights to all Americans – not just the straight ones. We as a nation have evolved to accept that “all men (and woman) were created equally”. We understand the basic concept that discrimination is a bad thing. To single someone out as less than human because of the color of their skin, or their religious affiliation has long been a no-no. Why then is it ok to discriminate against gays?

I urge all my fellow citizens of Maine to stand up. Do not let the likes of Heath and Madore dictate their morality to you. Remember, “All that is required for Evil to triumph is for good men to do nothing”. We all know what is right. We all know what we have to do. Defeat the closed-minded bigotry that comes from the Christian Conservatives. Think for yourselves, and do the right thing.

“I believe that Unarmed Truth and Unconditional Love
will have the final word in reality.
That is why Good temporarily defeated
is still stronger than Evil triumphant.”